Can I refuse a DUI breathalyzer, blood, or urine test in Arizona?

You have the right to refuse DUI breathalyzer, blood or other chemical test in Arizona, unless the police officer has a search warrant. In the alternative, the officer may conduct an unwarranted DUI test, if a valid exception applies.

The right to refuse is derived from the 5th Amendment of the United States Constitution and Article which affords individuals protection from self-incrimination.

The U.S. Supreme Court and Arizona Courts have held that DUI breath and chemical tests are protected searches, governed by 4th amendment.

This means that police will need a search warrant to conduct one of these tests.

Despite the fact that you can refuse DUI breath, blood, or urine tests, a refusal of these tests activates statutory Motor Vehicle Department (MVD) consequences. Under Arizona’s Implied Consent law A.R.S. 28-1321 a refusal of breathalyzer, blood, or urine tests subject to Arizona DUI laws results in a one year suspension of driving privileges. For a second refusal within 84 months, the driving suspension is for a period of 2 years.

What are the consequences of refusing a DUI breathalyzer, blood, or urine test in Arizona? 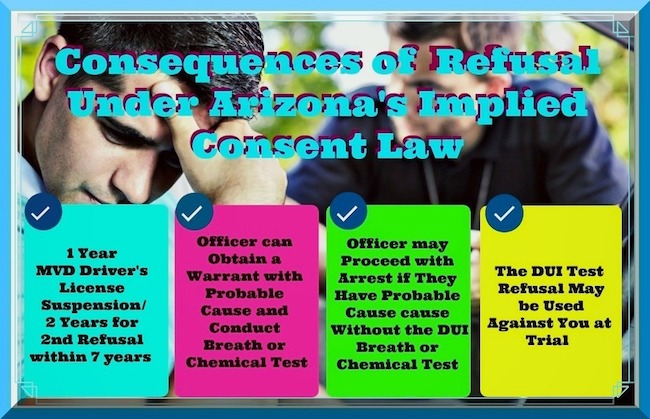 Consequences of refusing a DUI breath or chemical test in Arizona under A.R.S. 28 – 1321 (B) include the following:

If a person is unable to complete the test for any reason, it will be treated as a refusal for purposes of the MVD driver’s license suspension.

Following the expiration of the MVD suspension period, the person’s driver license may be reinstated only after successful completion of a drug or alcohol screening program.

What is Arizona Implied Consent Law?

The Implied Consent Law, A.R.S. 28-1321 is a statute which infers that all drivers in the state of Arizona are subject to breath and chemical testing, following an arrest. The statute applies to all drivers who operate a motor vehicle within the state, subject to Arizona’s DUI laws. Under the Implied Consent Law, police still need a warrant to conduct breath, or chemical tests, unless they have express consent of the driver, or another valid exception to the warrant exists. If police conduct an unwarranted DUI breath, or chemical test, without a person's express consent; or if the individual was coerced into taking the tests involuntarily, their rights may have been violated. It is important that the individual retain an experienced criminal defense attorney, like James Novak of the Law Office of James Novak, to protect their rights and defend their charges.

I refused a DUI Breath or Blood Test. What happens next? 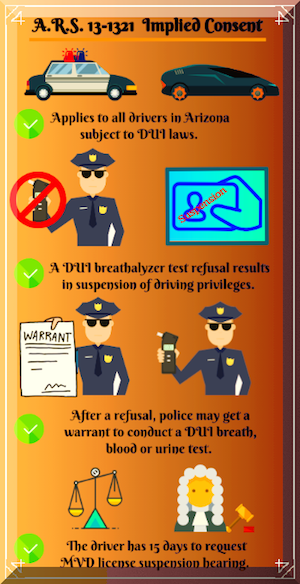 If the decision is that no suspension will be imposed, driving privileges will be reinstated. Procedures may vary for non-residents, and those arrested for DUI without a valid driver’s license. If you are not a resident of the U.S.A. you should consult an immigration attorney regarding the DUI refusal suspension.

The driver license suspension hearing is held in MVD administrative court, while the DUI charges are processed in criminal court. You also have the right to appeal the hearing decision under A.R.S. 28-3317, if you do not agree with the outcome.

What happens at the license suspension hearing for DUI test refusal?

The DUI driver license suspension hearing is not a criminal hearing. It is an administration hearing where the driver and the state both have an opportunity to provide evidence, or testimony to support their positions. The Arizona MVD hearing will be limited to review of the following issues:

The individual can represent themselves or be represented by an attorney, but the state does not provide court appointed attorneys for these hearings since they are administrative Motor Vehicle Department hearings, and not criminal proceedings.

What are Field Sobriety Tests, and can I refuse them?

You have the right to refuse Field Sobriety Testing (FSTs). These are tests of a different nature than breath or chemical tests. They are non-invasive, subjective, roadside tests conducted by the police.

Police administer the roadside tests, and then decide if you past or failed them. Refusal of these tests does not trigger the same MVD driving suspension penalties as the refusal of a DUI breath, blood, or urine test. However, refusal of these tests may compel the officer to obtain a search warrant to conduct a breathalyzer or blood test, and to make an arrest if they feel they have probable cause.

Police often assume that the reason a driver has chosen to refuse roadside testing, is because they were driving impaired due to alcohol or drugs.

However, despite the fact that these three standard FSTs are sponsored by the National Highway Traffic and Safety Administration (NHTSA), courts have often suppressed the test results, finding them inaccurate and unreliable.

Below are some reasons why FSTs become a common target for criminal defense attorneys to challenge the validity and accuracy of these tests:

For these reasons they are often challenged successfully in courts, by criminal defense attorneys, resulting in high inadmissibility rates. Some drivers mistakenly feel that if they pass the roadside test, it can help them avoid a DUI. But drivers should also keep in mind their high unreliability rate that can also result in them being charged with a DUI when in fact they were not driving impaired due to alcohol or drugs.

If you have been charged with DUI based on any roadside tests, or if you were coerced into taking roadside tests, or if police advised you that they were required, you should consult an experienced criminal defense attorney as soon as possible to discuss your options for legal representation and defense for your charges.

Do police need my consent to conduct a DUI breath or blood test?

Police do not need your consent to conduct a DUI breath, blood, or other chemical test. But if they have your express consent then they do not need to obtain a warrant.

If you do not expressly consent, or you are unable to complete the test for any reason, it will be viewed as a refusal, for purposes of the imposing the MVD driver’s license suspension under Arizona’s Implied Consent Law A.R.S. 28-1321.

In order for a driver’s consent to be valid, it must also be voluntary. Arizona courts review voluntariness based on all the circumstances surrounding the consent.

If you consented to the DUI breathalyzer, blood, or urine test, but feel you were coerced or misled into taking the test, then it is possible that your consent was involuntary. If your consent was involuntary, and police did not have a warrant, your rights may have been violated. If you were charged with DUI under these circumstances, you should consult an experienced criminal defense attorney regarding your defense options.

What are some exceptions to a search warrant requirement? 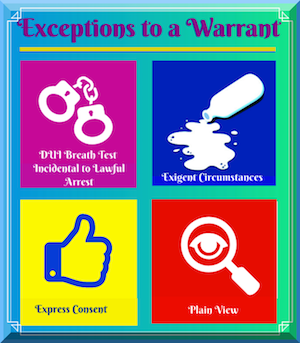 The U.S. Supreme Court recognizes several valid exceptions to the search warrant requirement including the four common exceptions listed below:

When police conduct a warrantless search under the grounds of an exception, the prosecution holds the burden of proof as to the reasonableness of the exception based on the circumstances involved at the time of the search. The court will determine whether or not a valid exception should be applied based on totality of the circumstances presented.

If police conducted an unwarranted search under false pretense of an exception, it is possible that the tests were conducted in violation of your rights. The most effective way to challenge a violation of rights pertaining to the DUI stop, testing, or arrest is to retain a skilled criminal defense attorney to represent you. If you face DUI or criminal charges in Tempe, Mesa, Gilbert, Chandler, Scottsdale, or Phoenix AZ in Maricopa County, call James Novak, of the Law Office of James Novak at (480-413-1499) today.

How can James Novak of The Law Office of James Novak help you fight your Extreme DUI Charges? 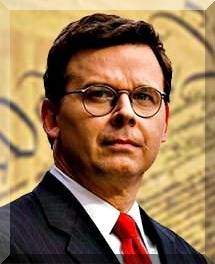 No matter what type of DUI you face, or how high your blood alcohol content, you have the right to defend your charges and retain effective legal representation.

James Novak of the Law Office of James Novak, PLLC is an experienced criminal defense attorney, and former prosecutor.

If retained, James Novak gathers all the evidence, has an independent lab retest DUI blood samples, and evaluates all the facts surrounding your charges. If the evidence is weak or invalid, James Novak will move to challenge the evidence. Other defenses may apply depending on the evidence and circumstances surrounding the DUI. If your rights were violated in the process of the DUI stop, testing, or arrest, James Novak will work to suppress evidence obtained in the process of the rights violation. The best outcome for anyone facing DUI charges would be to get their case dismissed. When that is not possible, alternative favorable outcomes may be obtained depending on the facts of the case. When you face impaired driving or other criminal charges, time is of the essence. The key to any type of successful outcome is early retention of a highly skilled and experienced criminal defense attorney like James Novak of the Law Office of James Novak, PLLC.