Aggravated and Mitigated Factors in Sentencing

What are Aggravated Factors in Sentencing? 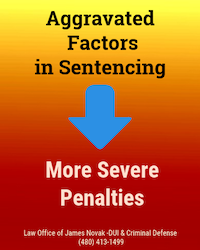 Aggravated factors are those circumstances that make a crime more serious. In turn, the penalties imposed are more severe for the conviction.

Aggravated and mitigated factors in sentencing are recognized at both the Federal level under Title 18 U.S. Code 3592, and the state level under A.R.S. 13-701. The court may also consider aggravated circumstances not listed under law if they are relevant and apply.

Under Arizona Criminal Code Sentencing Provisions, penalties for a conviction are based upon the classification of the charges. Each classification has a sentencing range of categories from less severe to more severe penalties. For example, non-dangerous crime sentencing includes mitigated, minimum, presumptive, maximums and aggravated penalties.

In some cases an aggravated factor will call for increased penalties such as maximum penalties, verses aggravated sentencing.

In order for the court to impose aggravated sentencing, it usually requires at least two aggravated factors to have been involved with the offense.

What are the Aggravated Factors Under Arizona Law? 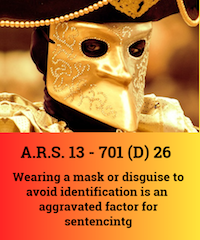 The newest one, HB2007, makes it an aggravated factor to use a disguise or mask to hide one’s face before, during, or after committing a criminal offense in an effort to avoid identification.

Below are the remaining 26 statutory factors listed under Arizona Criminal code:

Note: Capital cases involving potential life in prison or the death penalty with regard to consideration of aggravated and mitigating factors are subject to varied guidelines and jury instructions.

Who Decides if Aggravated Sentencing will be Imposed? 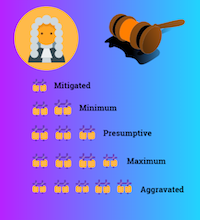 The presiding judge decides whether or not aggravated sentencing will be imposed. The judge has the authority to decide what penalties to impose within a statutory sentencing range based on the circumstances surrounding the conviction.

The judge’s decision is based on a number of factors. These include but are not limited to the nature of the crime, whether it was dangerous or non-dangerous, whether aggravated or mitigating circumstances were involved, prior convictions, repeat offense, and whether or not the crime involved a victim.

When both aggravated and mitigating factors are involved, the judge will weigh them against each other to determine what penalties will be imposed within the sentencing range.

Below is a sample case of facts where aggravated factors would likely call for aggravated sentencing in a felony case:

Example: The defendant was convicted theft of an item that exceeded $25,000.00. He was charged with a first time, non-dangerous class 2 felony offense.

Evidence indicated that defendant wore a mask to hide his identity.

While fleeing the scene of the crime, the defendant committed a hit and run. The defendant failed to stop or to provide vehicle registration, insurance, and identifying information, or to find out if the driver was in need of emergency assistance.

The defendant was found guilty at trial.

No mitigated factors were presented.

What Standard of Proof is Required for Aggravated Factors to be Used? 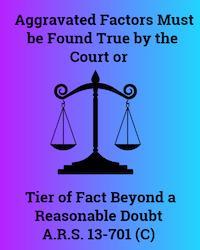 Both the United States Supreme Court and Arizona Supreme Court have long held that the standard of proof to be considered for aggravated factors is evidence beyond a reasonable doubt.

Under Arizona criminal code, A.R.S. 13-701 –(C) & (D), the standard of proof is proof for the first aggravated factor is “beyond a reasonable doubt” that the aggravated circumstance took place. However, the court may find additional factors by using the standard of “preponderance of the evidence.”

The exceptions are 1) If the defendant admitted to the aggravated factor, and 2) if it deals with a prior felony, the court will decide this this based on the facts presented.

If no mitigating factors have been presented to weigh against aggravating factors, the presiding judge will decide whether or not to impose an aggravated sentence if two or more exist.

What are Mitigating Factors in Sentencing? 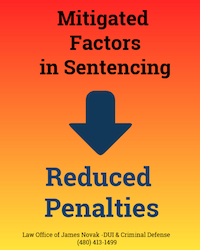 Under A.R.S. 13-701 (E) there are 6 statutory mitigating factors that can be considered for sentencing as follows:

1. The defendant’s age; 2. Culpability or the lack of capability to understand and recognize the unlawful nature of their actions; 3. The defendant acted under duress; 4. The defendant’s involvement in the offense was trivial; 5. In the event of a hit and run, leaving the scene of the accident, or failure to provide required information after an accident, and the defendant later complied. 6. Any other aspect of the defendant’s record, character, or other relevant circumstance not listed under the statute. In order for a mitigating factors found to be considered it must be found true by the court based on the evidence presented in the case.

Below is a sample case of how a mitigating factor can impact sentencing:

Example: The defendant was found guilty of being an accomplice in an armed robbery and convicted of a class 2 dangerous felony.

Her boyfriend committed the armed robbery while she waited in the vehicle.

The defendant’s attorney argued that while the defendant admitted that was aware that a robbery was taking place, she testified that she had no knowledge of his possession of a gun, or his plans to threaten the cashier with it.

Her criminal defense attorney also argued that her involvement was minor and should be considered a mitigating circumstance.

This was the defendant’s first criminal offense.

After considering the mitigated factors of the defendant’s minimal involvement in the crime, and that fact that she had no knowledge that a weapon was used, the judge would likely impose the minimum sentence of 7 years prison.

How can a Criminal Attorney Help Me Resolve My Felony Charges? 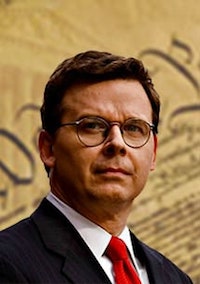 If you face felony charges in Arizona, it is serious since all felony offenses call for prison terms, and a felon criminal record that will impact your life for years.

When the conviction involves aggravated factors and sentencing, it becomes even more serious. Your freedom and future are at stake.

For anyone facing felony charges, the ideal outcome is to be able to get your charges dismissed. While this does occasionally happen, the reality is that a majority of felony charges are resolved through negotiated plea agreements in Arizona. For this reason it is important that you hire an attorney with strong negotiation and litigation skills as well as knowledge and experience in all phases of the criminal justice process.

James Novak, of the Law Office of James Novak, PLLC is an experienced felony defense attorney, and former prosecutor with over 20 years of experience in criminal law. He exclusively defends those charged with crimes in Mesa, Tempe, Chandler, Gilbert, Phoenix, and Scottsdale AZ.

James Novak takes felony charges very seriously and understands the impact it has on a person’s life. If retained, he can make sure your rights are protected and defend your charges. Criminal defense attorney James Novak will fight to get you the best possible outcome in your case. James Novak utilizes his strong negotiation skills and looks for strengths in your defense case, as well as weaknesses in the prosecution’s case . If a constitutional and acceptable negotiated agreement cannot be reached you still have the right to take your case to trial.

James Novak will look for, and present mitigating factors to the court to offset aggravated circumstances, as well as challenge any invalid aggravated factors that the prosecution plans to use against you at trial. Criminal Defense Attorney James Novak personally offers a free initial consultation for those facing active criminal or DUI charges in his service area. This includes both felonies and misdemeanors. If you have been charged with a crime contact or call (480) 413-1499 today to learn more about your options for defense and resolving your charges.