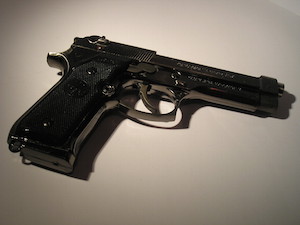 In Arizona if a person decides to fight back in an altercation, or to defend a loved one from deadly force by another, using a deadly weapon, they are at risk of facing serious criminal charges, in the aftermath.

Under Arizona Law if a person is suspected of assaulting someone, with use of a lethal weapon or dangerous instrument, they may be found guilty of “Aggravated Assault with a Deadly Weapon” in violation of A.R.S. 13- 1204.

Felony Assault with Deadly Weapon Laws in Arizona includes both a “deadly weapon” or a “dangerous instrument” under A.R.S. 13-1204.

Under Arizona law A.R.S. 13-105 (15), an object is considered a “deadly weapon” if by design it was created to be lethal, or capable of causing death.

Examples of deadly weapons would include handguns, assault weapons, or other firearms; Nunchaku; brass knuckles, daggers, machetes, explosives, combat knives, or other knives with deadly blades.

A person may also be charged with Aggravated Assault with a deadly weapon if they use a simulated weapon or what is defined by law as a “dangerous instruments.”

Under A.R.S. 13-105 (12) a “dangerous instrument” means an object that if used or if use is threatened, in given situations, could cause death or serious injury.

Dangerous instruments are those that are not created for lethal purposes but capable of causing death. For example, some objects that fit this category might include s hockey sticks, baseball bats, hammers, box cutters, screw driver, or bricks.

These are serious felony charges in Arizona, and considered dangerous and violent crimes against a victim.

Charges brought as Class 2 or Class 3 felony under A.R.S. 13-1204 depending on the circumstances.

Aggravated Assault with a Deadly Weapon, including simulated weapons charges are categorized as a Class 3 Felony.

Under A.R.S. 13 -704 a person will be exposed to the following prison terms if convicted of a Dangerous Class 3 Felony:

The charges will be elevated to a Class 2 felony if the victim is:

If convicted under these circumstances, the defendant will not serve less than the presumptive sentencing, meaning the sentencing will not be reduced by mitigating factors.

They will also not be eligible for suspension, commutation or early release for any reason, until sentence ordered by the court is served.

Under A.R.S. 13 -704 a person will be exposed to the following prison terms if convicted of Dangerous Class 2 felony:

A repeat offense exposes a person to increased maximums and extended sentences under the dangerous – repetitive -offenses sentencing guidelines of A.R.S. 13-704. For example, a second offense would call for the following:

Some of the most common defenses used to challenge Aggravated Assault with Deadly Weapon Charges are described as “Justification” Defenses. Justification defenses are those defenses in which the suspect does not deny their actions. Instead, they hold that their actions were justified under the circumstances. In other words, in absence of those justifiable circumstances, the defendant’s actions would be unlawful.

The defense examples are not all inclusive, and are separated into tw0 categories:

Other defenses used to challenge Aggravated Assault with at least one case law example:

Prior to 2006 justification defenses were considered “Affirmative” Defenses which required the accused to prove beyond “preponderance of the evidence” that they acted in self-defense.

Instead, they presumed innocent, unless the State could prove beyond a reasonable doubt that their actions were unjustified.

So for crimes committed after April 24, 2006, the bar raised for the prosecution to get a conviction.

In a trial involving a Justification Defense challenge, the Judge will instruct the jury hat State will need to prove beyond a reasonable doubt that the defendant’s actions were not justified.

The Judge will also explain to the Jurors in order to find the defendant guilty that juror should be firmly convinced of guilt and that each element of the charge should be proven.

The Jurors will then be instructed the if the possibility exists in the jurors mind as to innocence or guilt they must extend the benefit of the doubt in favor of the defendant, and find them “not-guilty”.

When Using Deadly Force is not justified

Under Arizona Law 13-404 (B) deadly force is not justified, and the justification defenses would not be available for use under the following circumstances:

Felony assault charges are some of the most serious charges that a person can face in Arizona.

If convicted, consequences and penalties will have adverse impacts on them for the rest of their lives. Their future and freedom are in jeopardy.

An arrest is not a conviction. No matter how serious the charges seem to be, a suspect has the right to retain legal representation by a competent and experienced attorney.

There are generally two sides to every story. A person will need to hire an effective attorney, to be their voice and present the facts as they relate to the defendant’s side of the story.

James Novak, of the Law Office of James Novak is an experienced trial and defense lawyer and former prosecutor. If retained he will provide a strong defense for the charges, protect his client’s right, and work hard to get the best possible outcome in the case.

Effective criminal defense attorneys, like James Novak will conduct their own investigation, review the prosecution’s evidence the prosecution for validity, and weaknesses, and seek exculpatory evidence in his client’s favor.

There may be defenses that that a person is not aware of, or evidence that is weak, inaccurate, or invalid, and should not be used against the defendant.

A suspect is also afforded rights under the constitution at any age. If a suspect’s rights have been violated this could lead to a more favorable outcome in the charges.

But the prosecution and the judge are not obligated to be legal advocates for the defendant regardless of age. The prosecutor’s main job is to get a conviction.

Even if they feel evidence is invalid, biased, or unfair, or even if they know there are ways to get the charges dismissed, mitigate sentencing, it is not their duty or obligation to point that out to the court or jury.

In a Trial Court the Judge’s main function is to review the evidence presented by the prosecution and defense for admissibility, to make sure court proceedings and rules are in compliance with the law and in order, to resolve disputes between attorneys as to what evidence can be or not be admitted, to make sure there is no prejudice for or against the defendant, to explain to the jury instructions and laws pertaining to the case.

They will need their own legal advocate to make sure their rights are protected, and to defend the charges.

Contact James Novak at (480) 413-1499 for a confidential and free initial consultation to discuss the matter and legal representation and defense options.